The Goldfinch — A Review 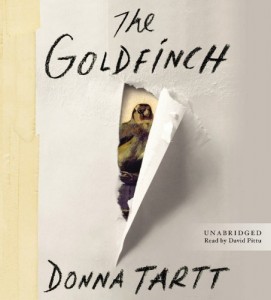 Last night I finished listening to the audio recording of The Goldfinch by Donna Tartt, which won a Pulitzer in 2014. Both before and after the award, it garnered a mixture of reviews, some praising it highly, some hating it.

One person I know (a fellow editor) called it “unreadable”. Really? Well I didn’t read it, I listened to it. But this bad publicity caused me to delay starting until there was nothing else new on my smartphone to listen to — particularly because the printed version weighs in at 800 pages.

I should point out that the reading of the audio version is first class. The reader, David Pittu, does voices superbly well.

I’m glad I started, because I quickly became engaged by it. And I truthfully can’t understand what all the negative fuss was about. Is it a perfect book? No, but how many perfect books have you read all the way through in your life? Do I intend to go out and find some of the negative reviews to discover why I’ve been deluded and should hate it instead of liking it? Why would I do that?

The basic elements are there: a good (if somewhat implausible) story; Dickensian characters (the comparison is not my origianl observation) the reader comes to know and like (mostly) and care about (I found the character of Boris to be far more interesting and multilayered than the main character, ultimately an example of a good rogue/bad guy with a heart of gold); beautiful language; and stuff that makes you think real hard and for a long time.

The novel takes its name from a seventeenth century painting by Carel Fabritius, which today is perfectly safe in a museum in The Hague, where it’s been for ages. But in the novel it’s more or less stolen (it’s complicated) by Theo Decker, a thirteen-year-old boy, when he is at the New York Metropolitan Museum to see it on display, and there is a terrorist attack that kills many people, including Theo’s mother. The reason he does this is all very understandable in context and even excusable if you attach more value to the life of a young boy victimized by terrorists than to a painting, no matter how allegedly priceless.

The boy winds up keeping the painting, perfectly safe but hidden, for many years. He loves the painting, his mother who died in the bombing loved the painting, and the older man who dies beside him in the rubble had loved the painting since childhood. Theo — who becomes a man and is around thirty by the novel’s end — wanted almost from the beginning nothing more than to return the painting to its rightful custodians, but he simply hasn’t known how to do it. And the longer he keeps it, the harder it becomes.

Many, many things happen in the course of this book, most of them at least interesting. Theo Decker makes a number of radically different friends. In the end the painting is returned. That’s about as short as I know how to make the incredibly long story. And yes, it’s a spoiler, but not a very big one in my opinion. And all is well. Does everyone live happily ever after? Hard to say. That all concerned are much wiser is a certainty.

The protracted ending includes a lot of discussion about how objects of beauty affect different people in different ways. How that particular painting ninety-nine percent of all people will walk by in a museum and say “Mmm hmm” and not think about it again for the rest of their lives, whereas other people will look at it again and again and take airplane trips halfway around the world to be able to have another look at the original.

Furthermore, the thing that gets people is different for almost everyone. Someone will see brush strokes, another color, another composition, another symbolism, another a beautiful line, another a story or a mystery, so that even though the work itself may be whatever it is, static and unchanging, its higher meaning is what it is in relation to the one viewing it, and that’s different with each person.

That’s dumbing down the conclusion to near moron level, but any person who has learned to respond to objects of art will know exactly what I’m talking about.

Unfavorable reviews generally tell me more about the reviewer (something I rarely wish to know) than about the object reviewed. The review gives the reviewer a platform to rant and fuss and show his or her own self-assumed superiority. (“Charlie Parker? Oh man, I can’t believe you like him. Whoever said he could play the saxophone?” — Yes, there are people like that.)

I rarely write unfavorable reviews myself because if I don’t like something, I don’t finish it, or if I do, I don’t see the point of wasting my time fussing with it. There may be exceptions, when there is something instructive and useful to be learned from it.

As in all matters, YMMV. There’s probably someone reading this who thinks The Goldfinch is the worst, most overrated piece of tripe ever written. I would save that honor for something by Dan Brown.