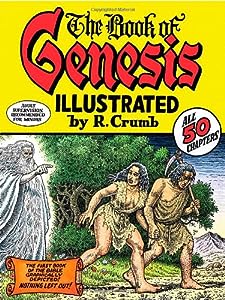 We were present at the Columbus Museum of Art on October 7, 2010, for the members only opening of the exhibit “The Bible Illuminated: R. Crumb’s Book of Genesis.”

If you are unfamiliar with the world of comic book and cartoon art, you may not know who Robert Crumb is, known professionally as R. Crumb. But if you have had any exposure at all to that medium, you will likely know who I’m talking about, because Crumb is among the most admired of all underground comic artists. If you’ve ever seen the one-page comic Keep on Truckin’, which was plastered everywhere starting in 1968, or are familiar with “Fritz the Cat,” then you have seen a miniscule portion of Crumb’s prolific output.

Crumb is not for everybody. Some of his work is vulgar, even frankly pornographic. But above all, Crumb draws well, and his work is usually at least interesting in its meticulous attention to detail, and is at times innovative.

My first conscious exposure to Crumb was by means of the collaborations he did on “American Splendor” with Cleveland comic author Harvey Pekar, who did not draw himself, but simply wrote stories about his own life, and sketched what he wanted with stick figures, leaving the drawing to others.  Crumb was still unknown and living in Cleveland in the mid sixties, when they met and struck up a friendship based on mutual tastes in music. Pekar showed Crumb his ideas for cartoons, and Crumb offered to draw some of them for him, which led to success for Pekar — as successful as underground comic artists get — resulting even in the 2003 movie entitled “American Splendor,” with Paul Giamatti playing Pekar.

Meanwhile, Crumb moved on to San Francisco, other work, including such jobs as popular album covers, and eventual fame in the late sixties scene of hippies and bands and all the rest — although Crumb himself was never a hippie, nor was he much like the people he hung out with and who admired him, which included notables such as Janis Joplin and the Grateful Dead.

Sometime in the eighties Crumb and his wife, tired of the United States, moved to an unglamorous dwelling in the south of France, where they remain to this day. He’s still hard at work.

Jump forward from the sixties several decades and most of a career, to the present. One day last year, before I was conscious of the name R. Crumb, I was browsing in the art book store at OSU’s Wexner Center and stumbled upon an astonishing work: “The Book of Genesis Illustrated by R.  Crumb” (That’s the exact full title.) As a student of the Bible for now over forty years, I was eager to see what this was about. Expecting to encounter disrespectful, gross distortions created for laughs, I was surprised to see instead a work in Crumb’s polished and unmodified cartooning style that seemed to be a faithful representation of the scriptural text, and including the text itself, though using a modern translation I am not familiar with. I thumbed through just a few pages before moving on, but the experience was memorable, and I wished I had more time to look at the book.

Which brings me to the primary subject of this article. On October 7, the Columbus Museum of art opened an exhibit of not just a sampling, but of all 207 of the original pages of this book, strung at comfortable reading level in a long, snaking sequence through a series of galleries. The originals are roughly 9×12 inches each (an eyeball guesstimate), and extraordinary to look at.

It was then that I learned that every word of Genesis is written on those pages, including the genealogies, looking much like rogues galleries, and that the artist, who says he believes that Genesis is a work of men rather than the word of God, nonetheless spent five years working on the project, giving the greatest care and respect to the subject matter.  It’s the juxtaposition of the sacred text with R. Crumb’s uncompromised and highly distinctive style that make the work special.

Decades ago I lost track of the number of times I’d read through Genesis (and the rest of the Bible, which, in contrast to Mr. Crumb, I do believe is the word of God). It’s fair to say that I know what it says.

I found at this show that it’s possible for someone familiar with the source material to cover the entire exhibit meaningfully, thereby “reading” the whole book of Genesis in about an hour and a half — which is exactly what Suzy and I did — with a short break in the middle to go hear a chorus performing on the grand staircase.

Imagine my amusement when I was jolted to see part of the narrative out of sequence. On one page I saw Rebekah nursing twins, and on the next she was pregnant. These things usually happen in the opposite order. That’s when I discovered that they had hung up two pages in the wrong order: 89, 91, and 90. (The numbers are written in light pencil outside the printing border.)

We finished just in time to hear the last background lecture by the show’s curator, who opened things up at the end for any questions. I asked whether she had been alerted to the incorrect sequence. She replied with considerable surprise that she didn’t know, was grateful to find out about it, and wondered how I knew. I said I knew because I know the Bible, and saw the story was out of sequence, but it was easy enough to verify by looking at the page numbers.

Even though hundreds of people trooped through the showing, few were making it much further than halfway; it was crowded at the front, where an anatomically correct Adam and Eve are seen standing naked, the crowd was desolate by Jacob’s deathbed prophecy, as if to indicate that sampling a few dozen pages was enough for most persons to get the idea. Because it was opening night, and because likely few people were reading in much detail, it’s no surprise that this hadn’t been reported, but if they failed to fix it, I’m sure someone else came along later and set them straight again, so presumably it is fixed by now.

If you live in Columbus, Ohio, be sure to get over to Columbus Museum of Art before January 16, 2011, when the exhibit closes.