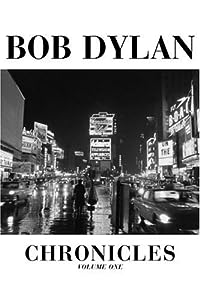 Contrary to implications from the title, and also to the customary method of presenting biography, Bob Dylan’s book Chronicles: Volume 1 is not a traditional “Born on a mountaintop in …” chronologically-told tale. We learn bits of the back story throughout the book, enough to be satisfied that Dylan, famous for his penchant for privacy, has not withheld anything important. Is it any business of we the curious to expect more? In any case, the sort of trivia that obsessive star-stalkers seek is not hard to uncover from other sources; some of it is even true. (Apparently, but what do I know?)

I’ve been listening to Bob Dylan since early times. I used to hear him regularly in the early sixties on The Midnight Special, a Saturday night radio program dedicated to American roots music, broadcast on Chicago’s great FM radio station WFMT. The show has been running continuously since 1953, though I haven’t heard it myself since college days. I don’t know how often they continued to play Dylan after he became a breakaway star. For all I know, they still do. For all he has done in his life, he remains first and foremost a folksinger.

Chronicles: Volume 1 opens and closes around Dylan’s signing first a publishing deal with Leeds Music, which he soon got out of (he was technically underage when he signed it without the co-signature of a parent or guardian), then a recording deal with Columbia Records, having been acquired by John Hammond, one of the greatest talent discoverers in music history — all before Dylan had begun to write much at all. In comparison, imagine being the record company that signed the Beatles before John and Paul had written Please Please Me — which actually happened.

To be invited to record with Columbia on the basis of Dylan’s prior experience was a happening equivalent in order of magnitude to an aspiring classical pianist being asked to present his world premiere performance as a concerto soloist with the New York Philharmonic. In those days (late 1961) you couldn’t get a better deal, although Columbia also had a reputation that if your first record didn’t sell well, they would bury you and your career would be over.

A few years later, my band was also invited to cut a demo for Columbia. They didn’t take us on. It was probably not a good match for either of us at the time. My band never went much of anywhere, and today nobody has heard of it. Obviously, it went better for Dylan.

Following the signings in October 1961, we are shifted back in time to February of that year, when nascent but already experienced folk singer Bob Zimmerman, not yet Dylan, arrived in New York City. We learn of his successful efforts to find venues in the West Village basket houses and clubs, another experience we shared with Dylan, ours about seven years later. Dylan’s repertoire was already substantial, but for a while he would do nothing but Woody Guthrie songs. He seems to be a sponge for memorizing words. He hadn’t yet begun writing songs of his own. And we are told of the friends he’d acquired who were happy to let him stay on their living room couches for weeks at a time.

Dylan had a feeling he was going places, but even he could not possibly have anticipated what actually happened.

It should come as no surprise that Dylan, revered even more for his poetic lyrics than for the music that accompanies them (although I like the music and lyrics equally myself), is capable of writing engaging passages of prose, interrupted occasionally by quirkily casual colloquialisms, such as “Me and Clayton went [somewhere],” which a friend postulates is just “Dylan going from Proust mode, say, to Woodie Guthrie mode, just because he is able to do so. Think Mark Twain.” Surely Bob Dylan knows how to use pronouns properly, so I’ll grant credence to my friend’s theory. There are nonetheless a few minor passages in the book that could have used closer attention by a copyeditor. But that’s a subject I’m prejudiced about.

There are some extraordinary passages in which Dylan describes his influences. He’s always been surrounded by music and books. Although he was determined to pursue folk music, he liked and absorbed everything: classical music, modern jazz, even a great deal of pop music, including commercial performers like Rick Nelson and the Kingston Trio. He’s always been more focused on the songs, particularly their stories and words, than the artifice used to put them across.

Dylan relates an experience where he woke up in the apartment of friends he was staying with, and explored their vast library, everything from the Greek, Latin, and old English classics to modern times, also history, art, and philosophy. Dylan devoured such things during his hours alone. Although Dylan was apparently a mediocre student back in Hibbing, Minnesota, it’s apparent he had by this time acquired a substantial storehouse of knowledge about many subjects. He made special effort to memorize longer and longer passages of difficult poetry, mostly because he liked it, but also for practice. Dylan thereby demonstrated something I’ve long believed, that being a good student and getting an education does not mean getting top grades in school, but actually learning something.

His tale is suffused with enough back references that it’s not necessary for him to devote a whole chapter, section, or other discrete part to his being born, his family, growing up, school, friends, and the like. He doesn’t try to hide any of it as though he disowned his past, which he manifestly has never done. But most of these details are not important to telling the story that people who are interested in Bob Dylan the self-invented character need to hear about.

Another segment, similar to the bookshelf exploration sequence, is his telling of going regularly to the New York Public Library and reading newspapers from 1855–65 on microfilm in order to absorb the flavor of their language, and to become more familiar firsthand with what the real stories and issues were in those days, which included far more than just states’ rights and slavery. The nation was a powder keg at the time, and the conflict that came was unstoppable, a cancer that the nation had to battle to get rid of. Those times generated a lot of good music that few people today have ever heard.

Dylan seems to have been conscious from an early age of what he wanted to do in life: to be a folk singer, and to make a mark in the world that way. Fame and wealth were not objectives; in fact, he anticipated working in relative obscurity while recording for some minor folk music label, rather than becoming a mainstream artist. He never expected to become as big as his idol Woodie Guthrie.

Suddenly readers are shifted forward in time ten years. Imagine an autobiography by John Lennon, in which he skips covering most of what happened to him between ages twenty and thirty. It’s kind of an important period in his life, don’tcha think?

Still, the stories Dylan tells of events that are highlights from his own perspective, particularly of recording sessions for certain key albums, are remarkably cogent and informative.

Finally, readers are time-shifted once again back to the signing of his record deal, to his discovery on the very same day of blues man Robert Johnson by means of an unreleased acetate John Hammond gave him, as Columbia had bought all Johnson’s recordings and intended to release them, and to a scene of Dylan, who had worked hard recently to manufacture himself, feeling a sense of destiny, that something big was about to happen — as indeed it did.

Will there be a Chronicles: Volume 2? I certainly hope so.