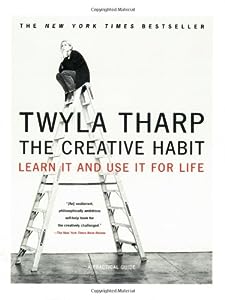 As a sometime composer and writer, I have always been fascinated by listening to creative people of all types discuss their work, especially how they go about doing it.  Therefore, when I recently bumped up against the title The Creative Habit, a 2001 book by master choreographer Twyla Tharp, I checked it out from the library to have some airplane reading on a trip to Arizona.

Ms. Tharp’s intention is to present a how-to book, replete with exercises, because she believes that (contrary to popular romantic notions about artistic inspiration) creativity is largely a matter of cultivating and practicing good work habits that allow creativity to sprout. This belief sounds like Thomas Edison’s famous saying: “Genius is one percent inspiration, ninety-nine percent perspiration.”

She writes first about the value of a regular daily routine, which for her begins with stepping into a cab early each morning to head to the gym for a workout. This is followed by blocks of time devoted to various categories of activity, such that by the end of day, all the most important tasks — workout, business, dancing, correspondence, and personal reading — have all been covered, whereupon she can retire, satisfied and ready to rest up and begin a new cycle the next day.

Forty years ago a close friend told me he had discovered that the more he repeated things — referring to the normal cycles of daily activities — the more good things happened in his life. His statement has stuck with me ever since, and I have learned it to be true.

Tharp says that before you can think outside a box, you have to have a box. To organize her projects, she uses literal, inexpensive file boxes from Office Depot to store all manner of physical materials she accumulates in the process of researching for and creating a new dance.

My boxes take the form of notebooks — many of them — paper notebooks that I carry around with me, and an array of computer-based notebooks any of which I may call up in a keystroke to prepend dated and labeled items of any length at the top. I’m presently composing this review using one of them, in which I have over 17,000 lines of text fragments that may someday see light of day in a blog article or other form of publication.

Where Ideas Come From

One of my most creative times of the day is that brief period in bed when I know I will be falling asleep momentarily, but am sufficiently conscious to enjoy the free associations running wild in my mind. Many is the time I’ve thought about getting out of bed to write down ideas that seemed worth preserving at the time, but I’ve never actually done it.

Ms. Tharp reports that Thomas Edison, famous for eschewing sleep, would sit in a chair when sleepy, palms up, with a ball bearing in each hand. When one ball bearing fell to the floor, it would wake him, and he would immediately write down what he was thinking in that idea-rich neverland between sleep and wakefulness.

Tharp tells us: “Like an athlete in training, the more you read, the more mentally fit you feel.” Rather than merely reading for pleasure, she devours the material, studying it, annotating the margins, and researching related topics.

Me too. That’s how one thing leads to another and ultimately to good ideas. I certainly read a great deal of lighter material for pure pleasure — popular fiction, cartoon books, even occasional children’s books — but whenever I read I hope to obtain something beneficial from the experience, even if it’s intangible and hard to identify. I almost never read just to pass the time.

Ms. Tharp places a premium on the value of developing skills of every kind to the ultimate degree possible, illustrating: “A successful entrepreneur can do everything and anything — stock the warehouse, negotiate with vendors, develop a product, design an ad campaign, close a deal, placate an unhappy customer — as well as, if not better than, anyone working for him.” She quotes golfer Gary Player as having said, “The harder I practice, the luckier I get,” and applies the principle to skills beyond what are most essential for her art form. As a choreographer and dancer, of course she devotes great energy to dancing itself, especially to improvisation. But she also works to understand music, literature, theater, costume design, business, and a host of other disciplines that enable her to keep a company of full-time dancers employed.

On being in a groove, Tharp commits a minor error of musical fact, saying: “When I think of a groove, I imagine Bach bounding out of bed to compose his preludes and fugues, knowing that he had twenty-four keys to work with. ‘Let’s see,’ he must have thought, ‘today I’ll tackle G-sharp major and A-flat minor.'”

Speaking with my musical editor’s hat on: the pitches we call G-sharp and A-flat are enharmonically equivalent in the equal tempered tuning system that Bach explored in Das Wohltemperierte Clavier that she alludes to; simply put, to play either one you press the same key, the middle of any of those sets of three adjacent black keys on a piano keyboard.

The key of A-flat minor is plausible but unlikely, because it would require seven flats in the key signature, so that every one of the seven scale pitches is flatted. That’s a lot of flats, so Bach instead wrote the minor prelude and fugue on that pitch in G-sharp minor, which has five sharps — still a lot to remember, and not often encountered, but a bit easier to read.

But G-sharp major exists only theoretically, in that the key signature would have not merely seven, but eight sharps in it, meaning that the F would be a double sharp, raised two half tones. It’s possible to go on adding as many sharps and flats as desired, but there is no point to it, because once every scale pitch has been flatted or sharped, there is an enharmonic equivalent that is simpler and a whole lot easier to read, and is why Bach stopped with twenty-four of each — the twelve major and minor keys on each of the twelve degrees in the equal tempered system that has been the standard tuning in Western music for centuries. In this case, Bach wrote the prelude and fugue not in G-sharp major, but in A-flat major, with its key signature of only four flats.

If Ms. Tharp had proposed Bach might have thought, “Today I’ll tackle A-flat major and G-sharp minor,” there would have been no problem. For this minor booboo we can easily forgive her, a proven genius at her art, and knowledgeable about many subjects including music, but not necessarily expert in music theory.

Thank you, Twyla Tharp, for providing these tools by means of which I may keep my own creative skills percolating.

o Writer and Editor o Computer Technologist o Composer o Ultrarunner
View all posts by Lynn →
This entry was posted in Arts, Legacy, Music, Re: Views and tagged The Creative Habit: Learn It and Use It for Life, Twyla Tharp. Bookmark the permalink.