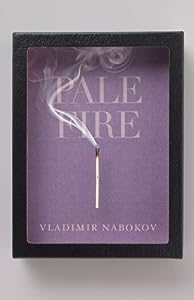 Vladimir Nabokov‘s 1963 novel Pale Fire appears on a number of lists purporting to identify the greatest novels of the twentieth century. I wouldn’t dare to attempt a literary analysis of Pale Fire. It’s been a staple of literature classes for over forty years, and countless reviews and scholarly studies have been created for it; also a number of study guides, replete with pseudo-analyses. These are readily found on the Internet.

Recently I wrote an article about the movie Bright Star, about the life of the romantic poet John Keats. Now here I am, writing a reminiscence of a novel titled Pale Fire, about a poem of the same name by a fictional poet John Shade. The title similarity amuses me. Of course, the coincidence has utterly no significance.

For readers unfamiliar with Nabokov’s novel, the basic story goes like this: The main character is a lunatic named Charles Kinbote, who claims to be the deposed and exiled King Charles the Beloved from Zembla, located “far to the north.” He moves in right next to John Shade and his wife Sybil. Shade is a highly respected poet who teaches at a college in Appalachia. Kinbote, a Shakespeare expert, has come there to teach at the same college, and befriends Shade. It becomes clear rather quickly that Shade has only courteously pretended interest in his neighbor, whereas Kinbote is sycophantically obsessed by Shade, who is hard at work on a new lengthy poem, which turns out to be autobiographical, but which Kinbote imagines will be about Zembla and his role there as king. While waiting anxiously for the completed poem, Kinbote makes a pest of himself to the Shades. Sybil Shade refers to Kinbote as “an elephantine tick; a king-sized botfly; a macao worm; the monstrous parasite of a genius.” He has not endeared himself to the Shade household.

In the end, on the day Shade completes his poem, another lunatic, a man known as Gradus, appears out of nowhere, and shoots John Shade dead. Kinbote is convinced that the man was a professional but inept assassin whose real target was the escaped King. The police determine he is really an escapee from an asylum for the criminally insane who has come to kill a judge who sent him up, but who stupidly kills the wrong man, both in the real part of the story, and in Kinbote’s imagined version of it. Kinbote steals the poem, goes into hiding, and writes the commentary that constitutes the bulk of the book.

I’ve obviously left out a lot, but there is far more to this novel than the story. Most unusual is its structure, which on the surface consists of a Foreword written by Dr. Charles Kinbote, followed by the 999-line poem “Pale Fire” by John Shade, and 250 pages of commentary on the poem, once again by Dr. Charles Kinbote, including an index of about ten pages. Outwardly, the book looks like a scholarly book of literary analysis. However, every word of the Foreword, poem, commentary, and index are fiction written by Vladimir Nabokov, and form a complete and engrossing novel.

Rather than write more about the story, which is obtainable elsewhere, I wish to comment on the copy I had in my possession, which came from the general circulation shelves of the Bexley Library.

After reading every single word on the jacket and in the front-matter before the novel’s text begins (there’s very little), I concluded that I held in my hands an genuine first edition, first impression of one of the great novels in English literature.

The book is in excellent condition. Of course the library has stuck its own goo on it, such as the cellophane cover over the jacket, and various stickers and stamps. The binding started to come loose from the cover, but it’s been well mended. On about six pages here are the scribblings of a child from a black ball point pen. (Regrettable.)

I’m humbled by the realization of what I’d been permitted to bring home from the library, to treat no differently than if it were a Sunset book on gardening or a collection of Garfield cartoons. (Which, as a respecter of library property, is carefully, regardless of content, but not everyone is so inclined.)

Pale Fire probably doesn’t get checked out very often. This is the sort of item that an unscrupulous person might claim was “lost” and then resell for far more than the cost of a replacement, which would likely be some later edition, not a collector’s item.

I’m no rare books collector, but for very rough comparison I found a resource on the Internet about determining the value of first edition novels that used Kurt Vonnegut‘s Slaughterhouse Five as an example. At the time it was written, the numbers looked like this, depending on the condition of the book:

I wondered if the library tracks these things, so when I returned it today, I asked a librarian. She said that the Bexley library has no way to take special care of rare books, that the book was probably bought new and has just been on the shelves all this time. Yes, it’s possible that someone could report it missing, pay the replacement cost, and sell it for personal profit.

No, I’m not thinking of doing it myself.