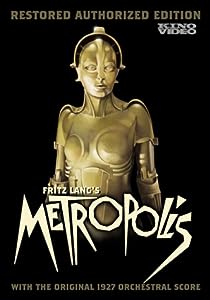 Last night we saw the recently restored version of Franz Lang’s 1927 masterpiece silent film Metropolis, the progenitor of almost every later science fiction action film. The venue was one of my favorite places in Columbus, the Wexner Center for the Arts on The Ohio State University campus, in the theater that holds about 600 people. (It’s the same place we saw What’s Up Doc? a few months ago, with director Peter Bogdanovich present in person.) It was a packed house, and I hear it’s sold out for tonight’s showing as well.

This version of the film, of which I had never seen any part, has twenty-five minutes of additional footage over the 2002 version, previously thought to be definitive. The original was two hours and thirty-three minutes, but was cut down to ninety minutes by the first distributors, who were afraid no one would want to see a movie that long. The film now runs for two hours and twenty-seven minutes, so not it’s 100% complete, but they’ve recovered just about everything. The new version was first shown on February 12, 2010.

The copy with the missing footage, thought to have vacated the planet, was discovered in Argentina (where it was made) in 2008. Work proceeded immediately on cleaning up the missing pieces and merging them into the 2002 edition. It’s not hard to tell what parts are new, because the the print they worked from had deteriorated badly, and the aspect ratio of the screen is narrower than what later became standard. Some of it is so scratched it’s like looking through a room through a curtain of glass beads.  Fortunately, it doesn’t take long to get used to this and to accept it for what it is. This has all been converted to digital format for distribution, of course. The visual quality overall is superb.

Metropolis has everything a movie-goer could ask for: a great plot with revolutionary and eschatological themes; good acting, all stylized with exaggerated and melodramatic facial and physical gestures characteristic of silent films of the day; fabulous cinematography; almost non-stop action; enormous and complex sets; a profusion of special effects that are decades ahead of their time technically, including the flooding of a city as big as New York, the transformation of a robot into a woman, burning a “witch” (actually the robot), and depictions of massive machinery; difficult stunts such as people falling off roofs; a non-stop musical score written for the original film, with Wagnerian leitmotifs, and references to everything from “Dies Irae” to “La Marseillaise”; thousands of extras; endless shots of hundreds of people at a time rushing around in panic at top speed, in tightly packed mobs, like a school of fish (not good for extras with claustrophobia); and of course, epic length.

This is highly recommended viewing for any lover of classic film. I understand it’s been circulating in art theaters across the country. I don’t know if it’s available from places like Netflix, but I gather it is not, so watch for it at a venue near you.