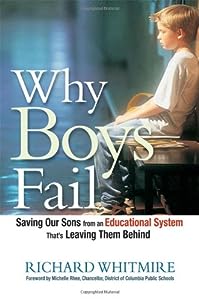 Last week I stumbled across a newly published book displayed on a book stand next to a terminal in the Bexley library: Why Boys Fail, by education reporter Richard Whitmire. Intrigued, I snatched it up and read it in two days.

The book’s main thesis is:

The world is becoming more verbal.
Boys are not.

That’s a direct quote, stated twice: once several chapters in, as a conclusion driven to by the evidence presented, and again in summarizing paragraphs.

The problem boils down to one of a lack of basic literacy, which is increasingly lacking in boys. This reality is obvious to me as I read drivel posted to various lists to which I subscribe, and even moreso on Facebook, Twitter and telephone text messages. To paraphrase a friend: Anyone whose thoughts are limited to a 140-character event horizon doesn’t have much to say.

Recently, a young friend sent me email to which I was obliged to respond, “So what’s with the gansta talk?” His reply, with numerous errors edited out here, said: “It’s just the way I type things out on the computer. I guess it comes from too much texting back forth to people who talk like that as well.”

This is not to say that one needs to deliver essays when a short sentence or two will do. But whatever is written should at least be reasonably correct. Occasional typos and blunders in informal writing happen with everyone, and are forgivable, but when every single sentence is laden with several misspellings, along with punctuation and grammatical errors, it suggests something is fundamentally lacking on the part of the communicator; it also suggests that he may not even care. Unfortunately, the ironic tragedy of ignorance is that ignorant people don’t know they are ignorant, so can’t detect the problem so as to fix it.

Whitmire presents abundant data to demonstrate that in the world of formal education (meaning in schools) and in those arenas of life that follow and surround the receiving of such education, there is a rapidly increasing gender gap.

Today 60% of college students are women. With the layoffs that came as a result of the economic collapse of 2008 and 2009, the workforce in the United States is now over half female. Whitmire doesn’t make the point directly, but it seems the days when Dad went to work and Mom stayed home with the kids are behind us.

In Montreal 71% of medical students, 63% of law students, 80% of optometry students, 64% of dentistry students, 56% of management students, and 70% of architecture students are women. The situation is similar elsewhere, indicating a shift to a female based economy in professions and services. While this is in some ways wonderful for women, it suggests that something has been happening for a long time with boys coming up through school age. The numbers are indisputable.

Whitmire presents and debunks the commonest knee-jerk explanations, among them:

All baloney as explanations of the waning literacy of young males.

Furthermore, the problem is happening throughout the world. In Australia, also in one or two other countries, authorities have already recognized the problem and have begun to confront it.

The last part of Why Boys Fail is devoted to a number of proposed reactions, which is what I prefer to call them rather than solutions, because none have been tried sufficiently to know they will work.

It’s not my intent here to present the arguments, the evidence, or the proposals. The problem is real. The reasons and solutions are not as obvious. Instead, I’d like to relate my personal experience.

When I was four years old, my mother, the oldest of eight Depression era farm kids, and the only one of her family to be sent to and complete college, obtaining a teaching degree, taught me, the oldest child in the family, how to read from the Dick and Jane series of reading primers. So in those pre-Sesame Street days I became an enthusiastic early reader, already fluently so, and even a hunt-and-peck typist, a fledgling writer, by the time I started kindergarten. My parents also introduced me to the library when I was very young, which I found to be an exciting place. In addition, we were the last family in our area to acquire a television, so that during the summers before we got one, I spent many days reading one book after another.

On page seventeen of the Why Boys Fail I encountered a subheading that caught my eye: “The Wilmette Discovery.”

Glenn “Max” McGee was serving as state superintendent of schools of Illinois when he noticed that interest in reading on the part of his own two sons showed a significant decline when they were in fifth and sixth grades, something he found hard to comprehend. Here I quote:

In 2002 McGee became superintendent of the K-8 Wilmette schools along Chicago’s high-income North Shore, right on the doorstep of Northwestern University. These schools feed into the famed New Trier High School, which rests high on any top ten list of America’s best high schools. McGee sat down to map out a way to accomplish what he describes as making the great schools there even greater. Based on his own family experience, McGee had a hunch: Let’s look at boosting boys’ performance. To the Wilmette educators, this was a radical approach. Who thought the boys had any problems?

So they got to work. It continues, “In Wilmette, … one of the wealthiest and most education-focused school districts in the United States, these inquiries are taken very seriously.” They issued a 107-page report to demonstrate that McGee’s hunch about the boys being in trouble was well founded.

Parents there appeared shocked by the report. Nobody thought this could happen in Wilmette. “We have very high-achieving parents … who serve as strong role models.”

“In Wilmette, nearly everyone eventually goes to college, even the slacker boys.”

Quite true. The reason this interests me is that I went through the Wilmette public schools and New Trier High School myself. New Trier was then and still is today a large and high quality public high school. My graduating class was over 960 people. We were told that 96% of us were headed off to college. No other future was ever discussed or even hinted at for anybody while I was growing up. The few who did not go were largely the troublemakers and the kids in the slow track courses, but I didn’t know many of them.

Our family was not rich; we were barely middle class economically speaking, as my father worked very hard to be the sole breadwinner in the family, making enough money as a classical musician to support a wife and four sons in such a place. The payoff for us boys was an enriched cultural experience that has influenced my viewpoint on education and life in general to this day.

To me education has always been only tangentially related to the formal part of it — attending schools, getting degrees and accreditations, pursuing the so-called American dream of having a family and a house in the suburbs with all the accouterments that go with that style of living. Frankly, when I was in school, I gave almost no thought to those matters, so little that it has caused me difficulties at various times that continue to this very day, as there are many practical subjects, even at my age — past the ordinary age of retirement — about which my understanding is deficient.

Education to me has always been about growing as a person by drinking in knowledge and experience by whatever means I can get it, and synthesizing that in such a way that my perspective on life deepens. And thus, at least for me, it continues to be, as I attempt by whatever means I can to learn more every single day of my life.

Sadly, it appears that this is not going to happen with many young males today.

Persons interested in knowing more about this topic may be