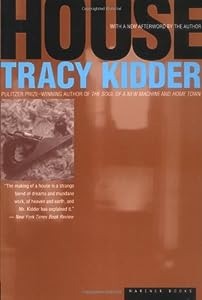 This morning I finished reading House, by literary non-fiction author Tracy Kidder, still most famous for his Pulitzer Prize winning book The Soul of a New Machine, written a couple of years before House.

The book was published in 1985. I bought it around the time it was on the shelves in bookstores as a new publication, except I got it through membership in the Paperback Book Club. It was an impulse purchase, acquired not out of deep interest in the subject matter, but because I admired the earlier book, and I enjoy the literary non-fiction genre. With fiction a reader might get an exciting story and beautiful language, but with literary non-fiction he gets all that, if the author is good, plus he might also learn something practical or interesting.

When House arrived, I put it on my shelf, intending to read it, but never cracked the cover until a few days ago. The pages of the book already have a weathered look, and the binding let go of several signatures early on. It was a twenty-five-year-old virgin book.

House is about the building of a new twelve-room house for the Jonathan and Judith Souweine family in Amherst, Massachusetts, in 1983. The Souweines were an energetic and intelligent Jewish couple. I say “were” because as I learned from querying the Internet about the book’s principals, Jonathan Souweine died on April 9, 2009, at age sixty-one. The couple had been sweethearts since high school. “We’ve always been married,” as Jonathan said during construction of their house. He was a successful lawyer and one-time politician who ran for district attorney, but lost, so left politics. Judith is still living (in the same house as far as I know), is a brilliant woman with a PhD in psychology, has done extensive work in education, and has pursued many useful avenues of service to humanity. She is still highly active in many projects.

The story of the building of this house is told much like a novel. The main characters are not, as a reader might presuppose, the Souweines, nor even the architect Bill Rawn, but the construction crew. The tale is told largely from their hands-on perspective, since they were the ones who actually did the work of building it. Their company, Apple Corps, was a cooperative consisting of four extremely gifted and dedicated carpenters—Jim Lowe (the boss and greater among equals), himself a literature reading son of a successful lawyer, Richard the workaholic, Ned the master craftsman, and Alex the philosopher, who went to Dartmouth and is as well-read as Jim. Collectively they embrace far more culture, taste, humor, and even formal education than one might typically expect to find in a construction crew. They are as different from one another as can be, yet get along together splendidly, brothers sharing a common view about the need to do a job the right way, taking time to fix and redo details no one else would ever see, until they meet their own exacting standards, usually at their own expense. As a result, their company, Apple Corps, made only $3,000 profit over and above the cost of materials and labor, which they dole out to themselves at the equal rate of fourteen dollars per hour—all against the approximately $150,000 total cost of the house, a great deal in 1983 money. The men were disappointed with the bottom line, but absolutely no one disagreed—builders, clients, the architect, the neighbors, and critics who come to look—that above all the house had been magnificently built. The work took five and a half months to accomplish.

An epilogue notes that the company went on to hire two or three younger, talented carpenters, and soon had more work than they could handle from clients who appreciated their work and were willing to pay for it. I don’t know how long the company survived, but would be surprised if any form of it is still in operation today.

I have no idea where any of these men are today or what they are doing. I think they were all young enough to still be in the work force today. A quick search indicates that Jim Locke wrote a book in 1988 called The Apple Corps Guide to the Well-Built House. I don’t know anything about the rest.

By 1985, in time to mention it at the end of the book, the house received an award from an association of architects in Boston, where William Rawn Associates is headquartered, for being a “house of distinction.” Rawn came from a wealthy banking family, eschewed the family fortune, but was a scary good student. He went first to Yale, then Harvard Law, and after practicing law for only two years, became an artist, to his family’s dismay, selling his drawings at high class galleries, and earning enough to send himself—without family money—to architecture school at MIT. Although he was already forty years old, the Souweine house was his very first project as a professional architect, designed when William Rawn “Associates” consisted only of William Rawn. Today it is one of the most distinguished of architectural firms. The company’s projects have included much in the way of prominent public spaces, especially theaters and university projects, including the Seiji Ozawa Hall at Tanglewood, an amazing building from what I see of it. There’s also an outdoor theater at Lincoln Center built by the company.

There is an excellent and beautiful collection of their many impressive projects on the company’s Web site. I highly recommend a visit.

Regrettably, an hour’s searching proved futile in coming up with any image whatsoever of the Souweine house. I can’t even ascertain an address in hopes of getting a look using Google Maps Street View. Because the house was featured in Kidder’s book, it may have been the Souweines’ desire to low profile their exposure, despite being high profile activists themselves, though at the time it was built, resources such as the Web did not exist, and few people, even wealthy ones, had computers. I’d love to see pictures of this house, at least of the outside, but also of the stairway, of which much is said.

After the initial design, Bill Rawn, a long time personal friend of he Souweines, became a supporting cast member, dropping in once and a while to see how things are going, and serving as a catalyst to demonstrate how in the world of building construction, there is always at least minor friction between architects and builders.

Builders are like software engineers. Regardless of what clients demand and marketeers promise, what the customers actually get in the end is whatever the engineers give them. They can either like it or sue.

Accordingly, the tension and release of the story flow in House has to little to do with the details of house construction, about which a novice can nonetheless learn much, but is about the individual personalities in the drama and the dynamics between them. Aesthetic principles aside, a lot of money was involved, also a building schedule that started in late April 1983 and lasted until the following mid-October; each person had his own interests and priorities in a project where much was at stake for all concerned. On many occasions there were heated words, particularly between Jim Locke and Jonathan Souweine, but in the end the clients loved their house, and agreed it was superbly designed and built. Despite some differences, everyone parted best of friends in the end.

Tracy Kidder has a wonderful ability to play the role of fly on the wall. The extensive detail he presents as direct quotes implies that he was personally on site for much of the building, and also for business meetings, and in the individual homes of the four contractors. Yet he never once mentions himself or even hints at his presence. The reader is led to conclude that he must have been there, unless he just made stuff up. But the dialog recorded has a strong ring of truth to it. When Kidder reports that Jim’s face turns red and he worries he may have overstepped his bounds with a snide comment, but that Jonathan comes back with a retort that indicates he took it well, was that fabricated? It is reported as being the way things really happened, and I am led to believe that it was. A silent observer had to be there to record it.

I could say much more about House but won’t. It was a thoroughly enjoyable read, and I recommend it.