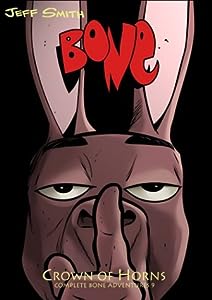 Cover of Crown of Horns (Bone, Vol. 9) Exactly one year ago today Suzy and I attended the world premiere of a documentary about comic book artist Jeff Smith, who is from Columbus area, and a graduate of The Ohio Statue University. Smith is famous in the world of comic book art as the creator of Bone, an epic graphic novel. The work has been translated into about fifteen languages, has sold over a million copies, and has been given two or three dozen different awards. I wouldn’t have guessed there are that many awards for comic books.

Though I have long loved good cartooning, as one who has had no interest whatever in comic books since my childhood days of Superman, Batman, and the Disney characters—particularly Scrooge McDuck—Smith and his work was utterly unfamiliar to me. When I saw the documentary, for which Jeff Smith was personally present, and the long line of people, including many adults, who were present to meet him and have him autograph their personal copies of Bone, I knew I had to put it on my reading list.

Bone is published in nine volumes, which I obtained recently from the Columbus Metropolitan Library. I spent about a day per volume reading the nine volumes, a total of 1375 pages, adding up the numbered pages, and finished it two or three days ago.

Anyone prejudiced against comic books might think that the term “graphic novel” to be pretentious, but Bone deserves the designation because it tells a continuous and well-crafted story.

The original comics were drawn and published in black and white, and then combined under one cover, which I have seen. Smith thought he was finished, until a friend told him that he really must republish the series with color added.

What I received from the library in three different trips was all nine volumes, but a total of eleven books. One volume they sent me both the color and the black and white versions, and another they sent me two identical color volumes. Two volumes arrived only in black and white. They are all still sitting on my desk behind me, waiting to be returned. Suzy is in the middle of the last volume herself, so I’m waiting for her to finish.

Smith’s friend was right: the added color is brilliantly done, so much so that I can’t imagine the book without it. Nonetheless, Smith had become a superstar in the world of comics well before the series was completed in black and white.

The story is readable by young readers, but includes much detail it to keep adults entertained. The main characters are the three Bone cousins: Fone Bone, the cheerful nice guy; Phoney Bone, who is driven relentlessly by sheer greed that drives him to perpetrate crazy schemes, but remains strangely likeable nonetheless; and Smiley Bone, about whom Fone Bone says, “He doesn’t have a brain,” though he proves to have a heart and many likeable qualities. Smiley Bone is definitely the Ringo of the group, as the trio would be incomplete without him.

The three are white like Casper the Ghost. Fone Bone is generally seen without clothing but carries a knapsack; Phoney Bone wears a t-shirt with a star on the chest; and Smiley Bone wears a vest and usually can materialize a cigar, which is never smoked or even commented on.

The other characters include a human girl named Thorn, drawn to appear drop dead gorgeous but not at all sexually provocative, appearing to be between sixteen and years old. Her grandmother Gran’ma Ben, who squints, wears a white apron, and has a mouth that both smiles and scowls simultaneously. Gran’ma Ben is as vigorous as Yiannis Kouros, runs many miles a day, races cows, proves to be a dynamic leader, and an invincible warrior. Thorn does not know it at the start, but Gran’ma Ben was a queen. Thorn’s parents, a king and queen, were killed in a war while fleeing from their city of Atheia, which makes Thorn a princess, and one who has special as yet undiscovered powers. At the beginning Gran’ma Ben and Thorn are living together in a tiny cabin in the woods.

There is a supporting cast of hilarious characters: a friendly dragon with floppy ears, a bug of unnamed type named Ted, drawn as a tiny green triangle with four little black legs sticking out of it, packs of rabid monsters called rat creatures who try to kill and eat whatever they can find, two in particular who remind me of Laurel and Hardy, love quiche, and are always bickering with one another, an inn and tavern full of humans men, and gigantic mountain lion named Roque Ja—the “r”should be rolled, but the Bone cousins call him Rock Jaw, evil hooded personages, and a host of others. Numerous new people are introduced in later volumes, some only briefly.

Fone Bone, the main character, the nicest guy, who becomes enamoured of Thorn, carries a backpack, with apparently nothing in it except a copy of his favorite book, Moby Dick, about which he can soliloquize at great length, causing everyone to fall into instant slumber. This becomes one of the running jokes for adults. In one episode Fone Bone and Smiley Bone are a hair’s breadth from being devoured by a pack of slavering, screeching rat creatures, when Smiley dives for Fone Bone’s back pack and begins reading: Call me Ishmael! whereupon the pack of rat monsters is rendered catatonic, frozen in sleep out of instantaneous boredom.

Later on Smiley finds a cub rat monster and cares for it, and it becomes friendly. He names it Bartleby, another nod to Herman Melville.

The story line eventually gets quite involved in intricate plot details in the manner of much fantasy fiction, a genre of which I am not generally a fan. I could care less about a tale of the struggle between mythical forces of good and evil. But story this is so well told with sufficient humorous twists that I couldn’t put it down for the humor, in addition to which it is brilliantly drawn.

Some main characters do die during the course of the story, so it’s not all a barrel of laughs.

There is a bit of pseudo Biblical allegory in the plot, though it’s obviously not intended to mimic the Bible too closely. There are great dragons (good guys) and Mim, the greatest dragon (very bad), and a Time of the End (or the End Times). Thorn is a vaguely messianic figure, who gradually learns her role in life, is abused and suffers for a while as she attempts to seek the Crown of Horns, which sounds much like a Crown of Thorns, and particularly so given her name is Thorn; thus when she accomplishes it, it becomes a sort of “Crown of Thorn’s” as it were. Except the crown is not a crown at all, but a stone wall deep under the earth, and it is not to be worn, but touched. Furthermore, Thorn is trapped in a dead bad monster’s jaws with a giant tooth through her thigh and cannot reach it, but she can touch Fone Bone, who can in turn reach the wall, upon which Good Things happen.

But more remains to be wrapped up after that, as there is an apocalyptic ending, where the floppy eared good dragon appears, calls up a horde of thousands of fellow dragons deep out of the earth who rise up, surround the giant bad dragon Mim, and carry it down into a massive pit within the earth that closes behind them, which is the end of this particular war of good versus evil.

Did you get all that? Were you taking notes? I don’t think I gave too much away that matters.

The ending, which takes a couple more chapters to spin out, is of course happy, and surprisingly mild, as the three Bone cousins get on a wagon and head back to Boneville, from which they were driven because of one of Phoney Bone’s crazy misguided plots a year before, as Phoney is foiled in his attempt to pull yet another dishonest stunt even upon their exit.

Bone is entertaining, well crafted, and very much worth reading by young and old alike; but don’t get started unless you’re okay with plowing through 1375 pages of comic book.